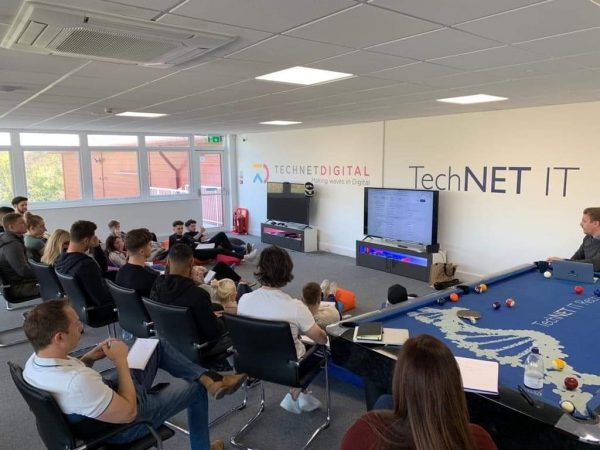 We sat down with Shayne Simpson, Operations Director of TechNET, to discuss the impact and subsequent absence of cube19, a week that runs itself, transitioning to Bullhorn and the topic of the hallways that’s Brexit!

“cube19 helped us seamlessly transition to a new CRM, optimise it and instill a culture of data consciousness throughout the company with everything we do.”

“Back when we worked off whiteboards there was little to no validation over what people were saying. Now, we ground every decision in fact.”

“When we’re looking at cube19 we’re searching for evidence, of what’s been done, and more importantly, of what’s not being done.”

“We already know what the benchmark for good looks like with cube19, so if interviews haven’t been booked, or the process is stalling, then we can move at speed to change the outcome.”

“That’s the biggest advantage of cube19 – having the speed, visibility, and evidence of the activity that’s actually happening.”

An advantage that’s bigger than a single solution

Despite the creative branding exercises of recruitment agencies, there’s very little that actually sets them apart in their chosen niche.

Agencies win new business on the networks they’ve built, the experience they package and the process underneath it – the key differentiator, however, is often rooted in the technology that drives these.

“With cube19, we can show tangible success to the clients that have historically been unwilling to engage with us.”

“We can outline KPIs, ratios, and benchmark against those we compete against in a like-for-like way. Our CV to interview ratio, for example, averages at 1.6 which speaks directly to the client about how well we know our market”

In a recent case study with Darwin Recruitment, we spoke about the challenges of adopting new technology into existing processes. Speaking to Shayne, it was clear that a key consideration for cube19 and the move to Bullhorn came from the wider tech stack it fits into.

“Bullhorn has a great integration with CloudCall that works in tandem with cube19 to capture that 360-degree understanding of the recruitment process.”

“When investing in technology you have to look at the sum of all parts, its adoption, and the ecosystem that it’s part of.”

“We leverage Awesome Docs and CVFormatter from Kyloe Partners to optimise Bullhorn and by working with Newbury SI Group there was no trouble in implementing the CRM and laying the foundations for the tech stack we wanted to build.”

“Bullhorn is great but cube19’s analytics are so much deeper and faster. They’re instant and we can have a deal flash or alert within ten seconds.”

“You can also look at Sourcebreaker, we made two deals off the back of two candidates that we simply wouldn’t have found otherwise, which paid for the initial investment.”

Recruiting with a data conscience

cube19 has been wrongly perceived as a way to micromanage, however, it’s a platform designed for improvement over management and consultants soon start to realise that when their numbers go up.

It goes beyond the activity of consultants to understand the inputs behind their output and helps every consultant find a faster route to cash.

“The flexibility of cube19 allowed us to customise our own metrics and bring them to where everyone was actually working against them.”

“We have visibility into the drop rates from counter-offers and the revenue lost from early finishes on contractors.”

OneView can be formatted so that consultants have visible indicators of what they need to achieve today to drive revenue forward. It means they can manage themselves and that managers can have the visibility of them doing so.

“If you have the right people bought into this tech, as we do, then it’s a dream bit of kit that’s unrivalled in the marketplace.”

To accommodate their expansion, TechNET uprooted from their offices earlier this year and moved to a new location with the intention to double headcount over the next three years.

Its absence showed its real value

During the transition, there was a three-week pause with cube19 in which productivity and revenue fell off a cliff.

“It was a tough period. People can be flamboyant with the truth so it was hard to know exactly how the company was performing.”

During the absence of cube19, the average recruitment cycle increased by almost three weeks which had a direct hit on the bottom line. Since settling and returning to using cube19, we’ve managed to recoup the lost ground and close the following quarter to outperform year-on-year growth for the entire first half.”

A Brexit opportunity with good technology

The only thing that we can say with absolute certainty about Brexit is how little we actually know about its long-term impact.

But, how does operating a recruitment agency against a backdrop of economic uncertainty make things harder?

“People are nervous. We already have a talent-short market that runs the risk of being amplified with tighter restrictions on work visas and a smaller skill pool.”

“However, for specialist recruitment agencies like ours, it also poses an opportunity. Businesses are going to continue to need that talent and partnering with us will ensure they have it.”

“We’re already seeing clients are more willing to pay higher fees to tap into the international pipeline and all the work that goes into navigating the recruitment process.”

“Agencies like ours, that double-down on constantly improving our processes, our technology, and our people will be more pivotal than ever in business growth.”

Calum is a specialist in writing stories and building strategies that improve the customer's experience and make their decision to buy simpler.

Join thousands of recruiters using cube19 to drive growth across every business area.